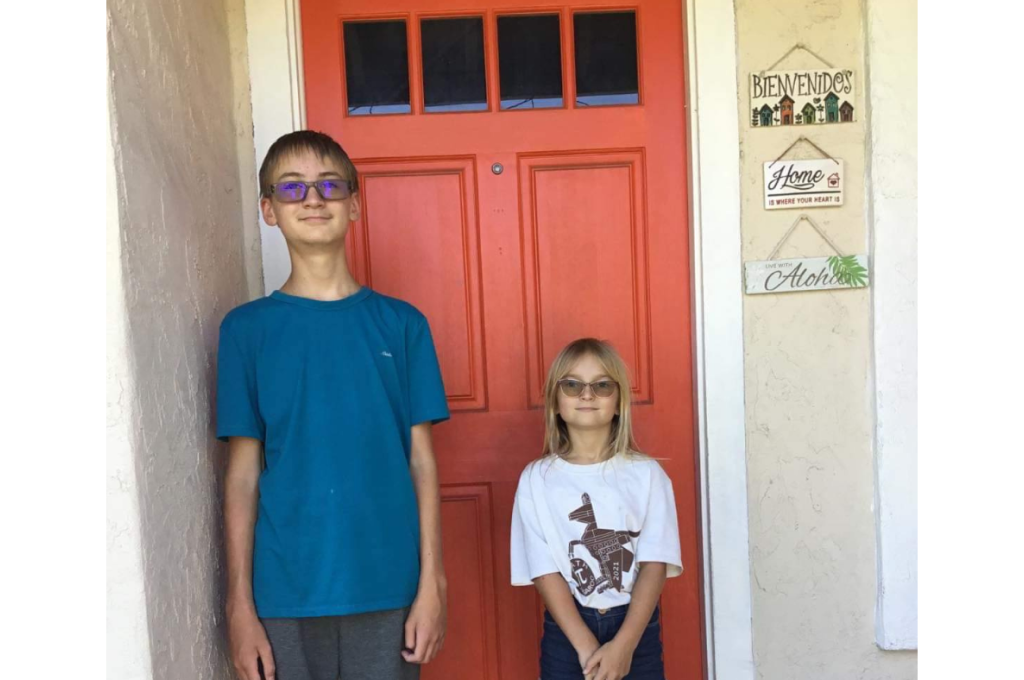 Olena Borysova, a mother of two EMC students, shared how her kids came to us 3 years ago and where are they now in their math studies:

"I have two degrees: the first is in electrical engineering, the second is in medicine. Back in elementary school I got fortunate with my math teacher, and that’s why I am not scared of math and love it dearly. I started teaching my own kids math when they were very little. I have a son and a daughter – Igor, who is now 12, and Arina, who is 9.

We started with the Japanese Kumon system. Their method uses a lot of repetition – there is this one book, for instance, that is entirely dedicated to addition from 1 to 10. In the back of every Kumon book, there is an answer section. Igor didn’t use the answer key, he genuinely has a knack for math, but my daughter figured out how to hack the system). Arina would copy the answer key for a certain problem, say, 1 + 2, and then just put it down for every other instance of this problem. I realized she was doing this mechanicanically, without understanding the meaning of the problems. That’s when I began to look for a math class for Arina, and tagged Igor along.

Three years ago I saw a Facebook ad for EMC. I drove to Anna Margolis’s garage (the school was there back then), saw the fire in her eyes, and knew that I found my teacher – one who loves math as much as I do and gets along with children. Exactly the kind of teacher I needed, so that my kids’ experience would be like mine – it doesn’t matter if they work on math behind, on top, or under a desk, as long as they’re learning how to get to the right answer.

When I left the house I called my husband, telling him: I found a teacher, you don’t know her, her name is Anna. He asked: “Is her last name Margolis?”. It turned out that our husbands worked together. Small world, everyone knows each other :-)

Igor has ADHD, which means that he has a lot of discomfort with everything new, including people. At first he was not enthusiastic about the idea of going to a new class. Homeschooling would’ve fit him best socially, but at home he gets distracted quickly, while in a classroom setting it’s easier for him to concentrate. Besides, I wanted to teach him to communicate. In this sense Anna’s lessons were also a perfect fit for us - Anna has a huge experience of talking with children like Igor. Nothing annoys her; she found an amazing approach to him.

I am very involved with my children’s education, so I can compare different systems: how they’re taught at school, at Kumon, and the methods that are used in EMC.

Anna, unlike other schools, has a homely approach. When I have difficulties teaching Igor (for example, when I cannot think of a way to explain something to him), I text Anna. She never ignores my questions; she helps, and offers suggestions.

Once it seemed to me that my son was overloaded. At school, he was in 5th grade, with EMC he had already reached 6th, and I felt that he was going too fast to understand all of the material, so I didn’t want him to move up a level. Anna said: “Are you crazy? His arithmetic is better than mine!  If you’re afraid it’ll be too hard for him, let me do some extra practice with him! He needs to move forward!” And so Igor successfully moved up to a higher level.

At school, Igor’s teacher offered him to take geometry through dual-enrollment, at a level higher. And Anna confirmed that he could. As a result, he passed geometry on his own.

Igor is actually a very insecure kid, the support of teachers helps him a lot. Through math, he understands that he is more capable than he thinks. And this is all, of course, thanks to Anna's personal approach.

Igor in general became less fearful.  Now he even wants to take additional English classes at school. I tried to dissuade, but he said: "I can."

I understand and relate to this myself: at school being good at math also  helped me communicate with the world, and made me feel more confident.

Also, both kids adore their textbooks. Recently, Arina did not let me throw away her old textbook. I was so surprised: “Are you going to read a math textbook??” “It’s basically a comic book!” she answered.

Now Igor is in 7th grade, and at school he takes Algebra-2 - at the level of children who are 2 years older than him. I didn't force him to do it, he wanted to.

Arina loves her classes. Teaching math through stories is the ideal technique!  Arina has another teacher this year, Louis, and she likes him very much. Sometimes Igor helps her with homework.

I am so happy that my love for math was passed on to them through these classes. I even wanted to volunteer with Anna - to be closer to math and to this joyful atmosphere. If  at some point I quit my work and go back to studying, I’ll return to this thought :).