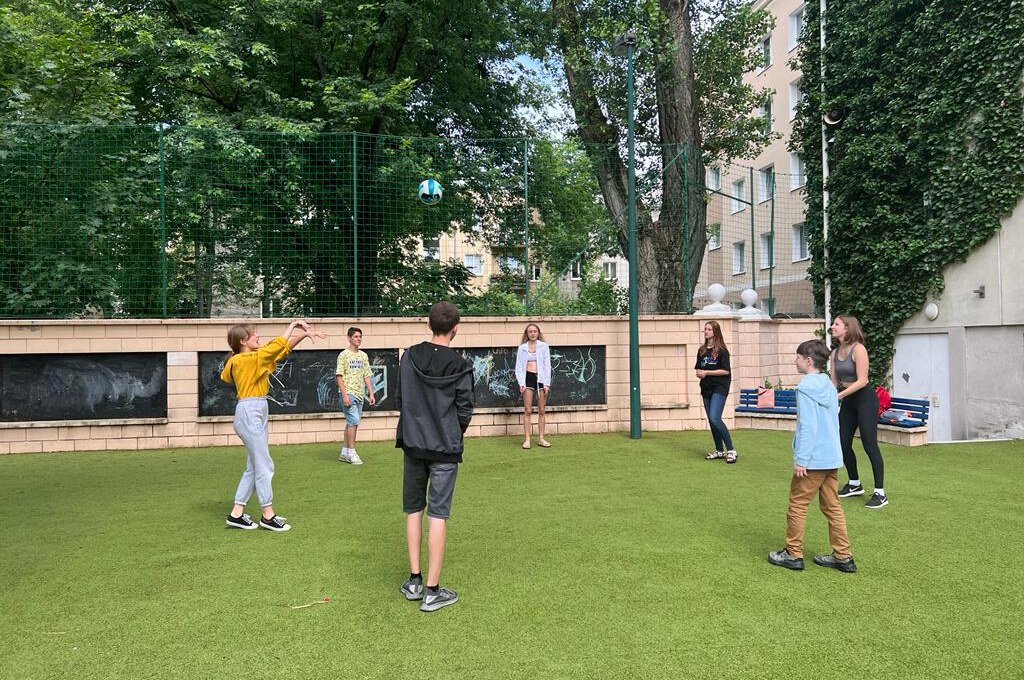 Anna Margolis, our director, is currently volunteering at a Warsaw summer camp for children of Ukrainian refugees. At the camp Anna runs morning workout sessions, helps with meals, and, of course, teaches math! If it’s not raining, Anna’s groups spend the day outside.  Her youngest kids are a group of 5-6 year olds, who are too young to sit still for a long time.  Anna has drawn upon her years as a math teacher and has come up with many ‘warm up’ games to keep kids moving, laughing and learning.  Try them with your kids!

This game goes with a song, translated here to English from Russian:

Leader: Are you hungry ?

Leader:  Fly home and get some food.

Kids:  But there is a wolf in the woods!

There is a wolf, scary and gray, he wants to catch us as his prey.

Leader:  Fly home, just be fast, you have strong wings to trust!

Fly as fast as you can, the wolf will never get you then!

At the beginning of the game, the leader and the kids (Geese) stand at opposite ends of the playing field. These two opposite sides of the field are “safe” areas for the Geese. The Wolf (another player) is in the middle and can run around between them. The kids’ goal is to run across, reaching the leader without getting caught by the Wolf. Those caught by the Wolf will join him to help catch the rest of the Geese in the next round. The game ends when the last kid is caught.

Anna’s version of how to play this game to teach numbers 1 to 10:

“First, we prepared the props. We took 10 paper plates and painted dots on them, one for each number 1-10. Then we wrote the numbers 1-10 on paper cups. By the way, preparing the props is an integral part of the lesson. While we were painting the dots, I would deliberately make mistakes, giving the kids opportunity to correct me. Sometimes I would paint a few dots and ask: “How many more dots do we need to add so that we have 7 (or any other number) dots total on this plate?” Kids wrote the numbers on the paper cups on their own, too – so there you go, plenty of practice :))

Once the props were ready, plates were put on one side of the playing field (being the food for the Geese) and I gave each kid a cup. The goal was to run to the other side of the field, place one’s cup onto the matching plate and not get caught by the Wolf.”

Anna learned this game from the kids at the camp.

Standing in a circle, the players throw a ball to each other. While throwing, you count to yourself (do not say out loud), “One, two, three…” With each count, you catch and throw the ball to the next player. At the last count (the 11th), instead of catching, let the ball drop.

You can play the game up to any number really, even counting backwards. You can also choose a number and then count its multiples.

Besides practicing your math skills, it's a great way to get kids organized, or settle down, since the game has to be played in complete silence!

The game “One, two, Meow” is a lot of fun to play with your whole family or a group of friends. It is also great for counting practice.

We start by defining the rules or “forbidden numbers'' - numbers that you are not allowed to say out loud and must replace with a sound.  Meow is always fun as a replacement :)

These numbers can be, for example: evens, odds, primes, multiples of 3, 4, and so on. This can be based on any other mathematical rule depending on the age and ability of your kids.

Start counting in order: one .. two .. three …  Every time a turn falls on the “forbidden number,” the player says “Meow!” instead of the number.  You can go round and round until someone messes up.  You can speed up the counting for an extra challenge.

Everyone can also take turns creating the rules for the “forbidden numbers”, switching directions of counting, etc.

With older children, you can work on larger numbers, starting with something other than one, or creating difficult mathematical rules.